Exploring Exhibits: “Medieval Europe: Power and Splendour” at the Canadian Museum of History

Recently Chris and I ventured to the Canadian Museum of History to catch the temporary exhibit, “Medieval Europe: Power and Splendour” before it closed. In a past undergraduate life I actually was a bit of a medievalist, so I was pretty interested to check out this exhibit.

This exhibit was brought over from the British Museum, and the introduction sets it up as taking a very broad overview of this period, one that encompasses 1,000 years of history. While writing this post, I took a look at the page advertising the exhibit and watched the video linked here. If that isn’t a pretty heavy reference to Game of Thrones to draw in the crowds, I don’t know what is!

One of the things that I thought was quite well done about this exhibit was the immersive quality. This was best executed in the section titled, “Heavenly Treasures,” focusing on religious life. Throughout this section there was choral music playing which helped give us a sense of how you were meant to feel in religious spaces: thoughtful, calm, and serene. One of my favourite small touches, however, was that throughout this section there were projections of church windows on the floor and walls, as though the light from outside of the church was streaming into the darkly-lit space. Once again, this helped add to the immersive aspects of the exhibits. This effect was so subtly done in fact, that I actually didn’t notice it at first when we began walking through. However, once I did notice it, I was extremely impressed and I think this was very well executed and an excellent idea. 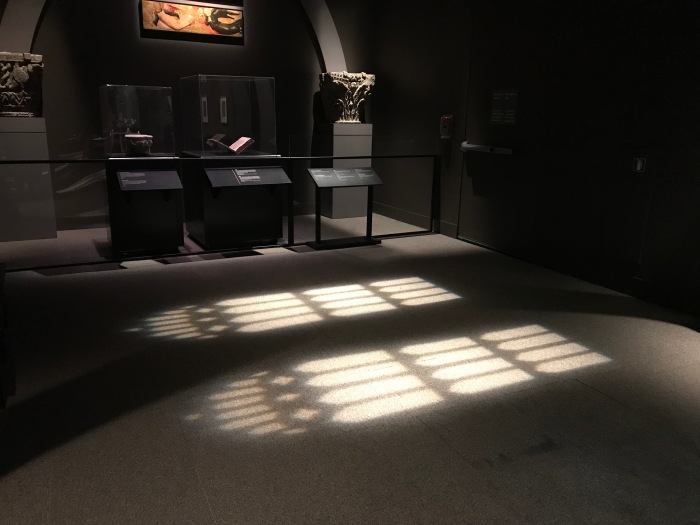 Otherwise, however, I felt that this exhibit took too broad of a view. Rather than focusing on a specific period or country, the exhibit is a mishmash of objects from across Europe over the course of 1000 years. The result of this is a pan-Medieval depiction that doesn’t distinguish between different cultures. This sweeping approach results in an exhibit that largely furthers the stereotypical views of this period that most people already have, i.e., knights in shining armour, powerful kings, wealthy lords, and fancy expensive objects. While it is certainly true that these things were a part of this period, they were far from the only parts, and this exhibit did very little to demonstrate this or to add nuance to these stereotyped depictions of this period. 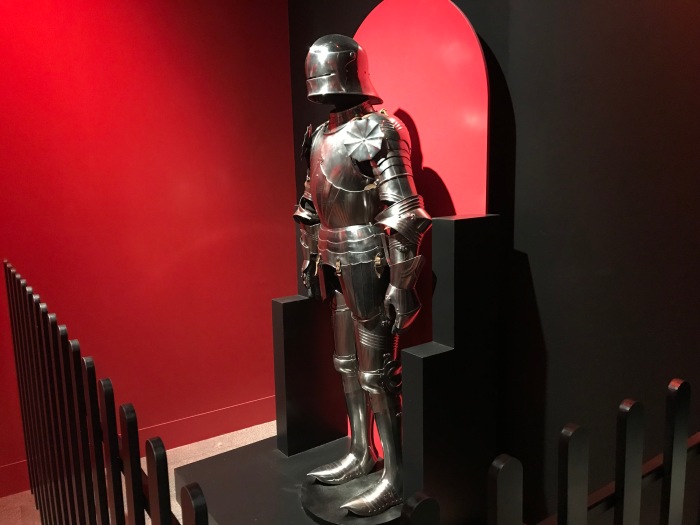 There was also a strong emphasis on the individual objects, and particularly how expensive the materials were and how finely crafted they were. Although the exhibit was broken into specific broad sections, including royal power and courtly life, there was no strong narrative tying everything together. Instead, it seemed to be a collection of factoids tied to each object. While overall I did not care for this approach, one of the things I think it did well as a result was to foster an interest in material culture, and learning about history through material culture. Rather than being an exhibit that tells a story or series of stories through objects, each object is allowed to tell its own story. Again, I feel that this should have been a bit more cohesive in terms of determine which objects to use together, but I think the approach itself is an interesting one, particularly for visitors that don’t read all of the panels and prefer to skim based on whichever objects catch their attention. 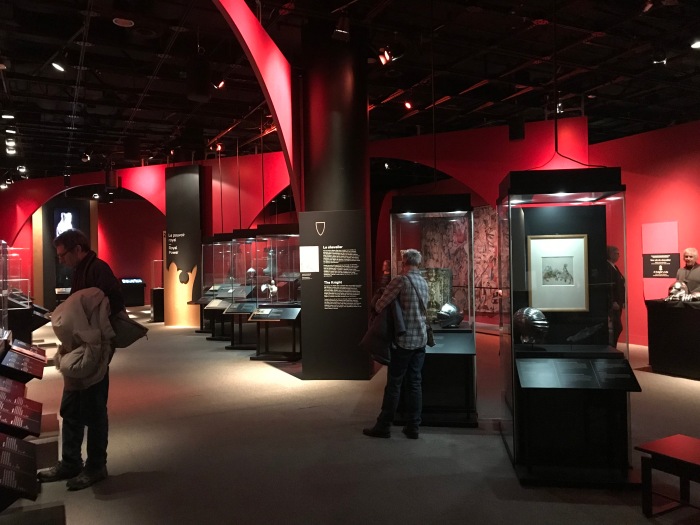 Looking at the choice of objects as a whole for this exhibit, the creators deliberately chose extremely expensive and finely crafted items. This does make sense when the intent of the exhibit was to focus on the power and splendour of this period. While there is nothing inherently wrong with focusing on the upper class of the Middle Ages, there was little effort to make the distinction that not everyone in this period had access to such fine goods. For example, in one panel describing a diamond ring, the text reads:

“Crafted from expensive materials, this solid-gold band is set with a pointed diamond and decorated on the hoop with black enamel. Diamonds are rare components, and were usually set in their uncut form. This diamond is cut, showing it was made towards the end of the period when the technology was developed.”

Not only does this give the impression that all items in this period were this special, but it also gives the impression of a highly whiggish progression of history, i.e. technology improved in leaps and bounds, and everything just got better and better and it was a given that this would happen. I also find that focusing on such high-end objects meant that there was little to no description or effort to demonstrate how anyone other than the elite lived their lives. 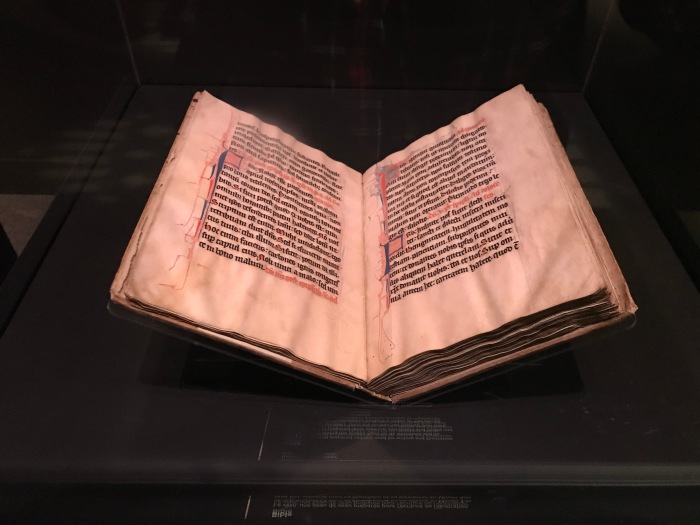 Chris and I had a discussion about this while I was working out my thoughts on the exhibit, and he raised the question, “But, how much material culture is actually left behind that could help show peasant and lower class people?” This is an entirely fair question, and while I did study Medieval history, it has been many years, and I’m not entirely sure myself what the answer to this is.

However, I do feel that, even if there is little to no material culture remaining from the lower classes of people in the Middle Ages, it would have been a much more interesting angle for the exhibit to actually draw attention to that fact. In my opinion, giving so much attention and focus to what in reality was an extremely small portion of the population over this period, without mentioning the lack of representation for the majority of people during this time, continues to perpetuate stereotypes about this period with what appears to be a complete lack of attempt or desire to add nuance to this image. 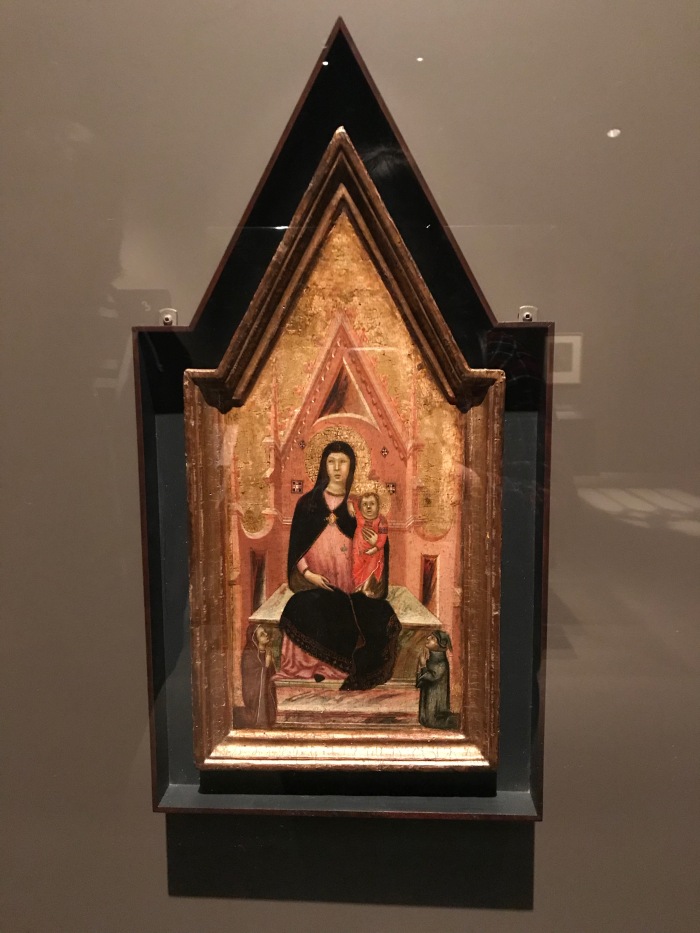 The second-last section focused on Urban Life, and in this area I actually thought that the text and objects began to hint a bit more at everyday life and people, however it was still very surface-level on the whole:

“The food and drink available to the wealthy were different to that consumed by the less well off, who were constantly at risk of famine. Staple foods were bread and stew based on oats and beans. Certain animals, including game, would only be eaten by the local lord, who had the sole right to hunt them.” 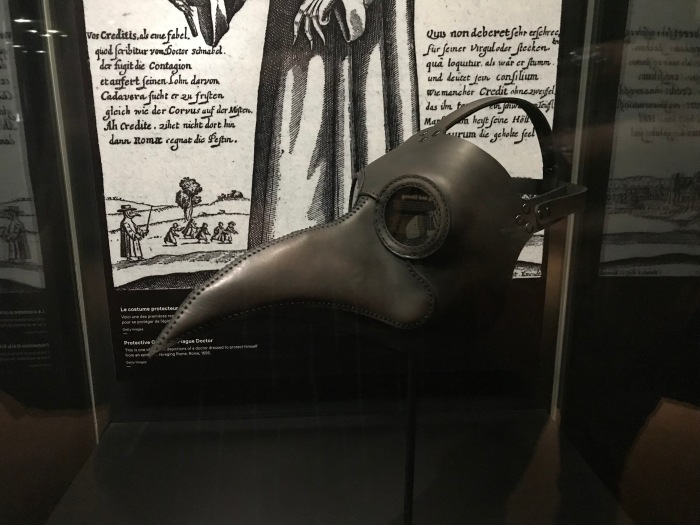 It was in the final section of the exhibit that I struggled the most with the content. This section focused on the legacy of the Middle Ages, as it pertains to Canada. The introductory panel describes this section as making the connection between the legacy of this period with some key artifacts in the collection of the Canadian Museum of History.

“The legacy of the historical period known as the Middle Ages endures to the present day. Lasting more than a thousand years, the Middle Ages ended around 1450. Despite wars, epidemics, and the transformation of Europe, the era was also characterized by intense artistic and cultural activity. This zone brings together several objects from the collection of the Canadian Museum of History reflecting the influence of the Middle Ages. Many medieval values, influences and customs can still be seen in Canada today.”

These influences consisted of universities, the Charter of Rights and Freedoms, the Gothic Revival Style, Heraldry, Pilgrimage, and Seigneurs and Seigneuries. While it is not incorrect that these things, in the context of a very, very long timeline, can be traced back to the Middle Ages, the way that this was presented in this exhibit was a stretch, in my opinion. For example, the Magna Carta is absolutely an essential document for the development of democratic rights and freedoms, however it is far too simplistic (albeit extremely popular) to make an argument on the basis of Magna Carta = Charter of Rights and Freedoms. To be clear, I don’t believe that the argument being made here was quite so simple, but I do think that the way that the artifacts were presented makes it very easy for visitors to jump to that conclusion. 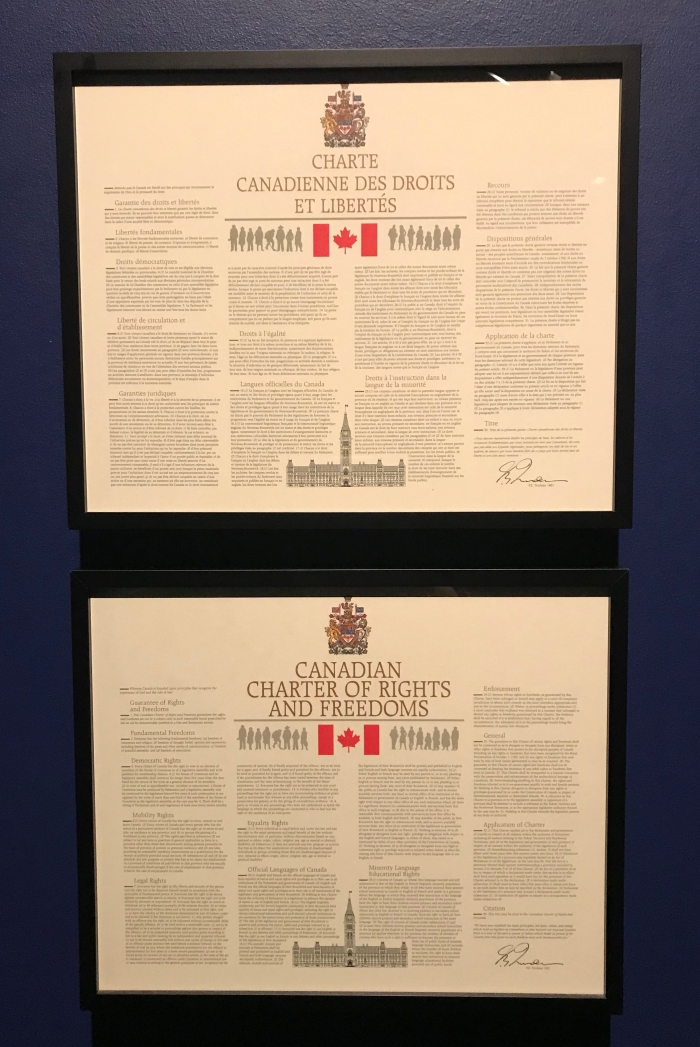 In general I thought that this section of the exhibit seemed out of place with the rest of it, and it felt like a forced addition tacked on a the last minute in an attempt to work some Canadian content into it. The result was a section that could have just as easily been titled, “How the Middle Ages invented everything.”

This exhibit closed on January 30th, 2019, so unfortunately if you haven’t seen it yet, you have missed the boat. If you did get a chance to see it, what did you think? Do you have opinions opposite to mine? If so, feel free to share and comment on this post to keep the conversation going!