On my visit to Toronto, I was probably the most excited to go to the Royal Ontario Museum. All I had ever heard about it told me that it would be huge and hugely overwhelming – I wasn’t disappointed in this regard.

I explored every exhibit in every room on every floor, all in one day. It took me about four hours, and at the end of my visit I realized that trying to see the entire ROM in one day was a mistake – there’s just way to much to try and take in. If you have never been, I would definitely suggest taking it a floor, or maybe two, at a time, to really get the full experience without completely exhausting yourself. I think for myself, I plan to focus on special exhibits and my favourite galleries in future visits.

All in all, the museum nerd in me was very excited and overwhelmed by everything on display, but the public historian in me found that it was very traditional in content and display on the whole. Given the long history of this museum, this is not necessarily a surprise, but I do feel that in general more effort should be made to modernize the content and presentation of the ROM’s permanent galleries. The fact that this is very possible, and possible to do extremely well is demonstrated by their temporary exhibits.

A hidden gem amongst their permanent exhibits was one instance in which the content and presentation had been updated, and I have to say it really caught my attention.

The exhibit featured a model of a Mohawk family, set up as if the figures were going about their daily lives. The original exhibit was installed in 1917 and showed the figures in a way that perpetuated stereotypes of Indigenous people as people who resided in the past. The new text for this display explains this, importantly drawing attention to the fact that, “[s]uch static displays give a misleading picture of indigenous cultures as unchanging, trapped in the past, and out of contact with other groups or historical events. These wrong impressions came to be the image that stayed with visitors beyond the museum doors.”

This is a photograph included in the text of the original exhibit:

In the updated version of the exhibit, objects and images have been added to add cultural and historical nuance that seeks to counter the original display and old stereotypes.

They also updated the plaque at the base of the display, and in my opinion this perfectly captures the spirit of the update:

“You have a phrase called ‘Golden Age.’ We do not want to be depicted the way we were, when we were first discovered in our homeland in North America. We do not want museums to continue to present us as something from the past. We believe we are very, very much here now and we are going to be important in the future.” – Georges Erasmus (Chief, Assembly of First Nations, 1992). 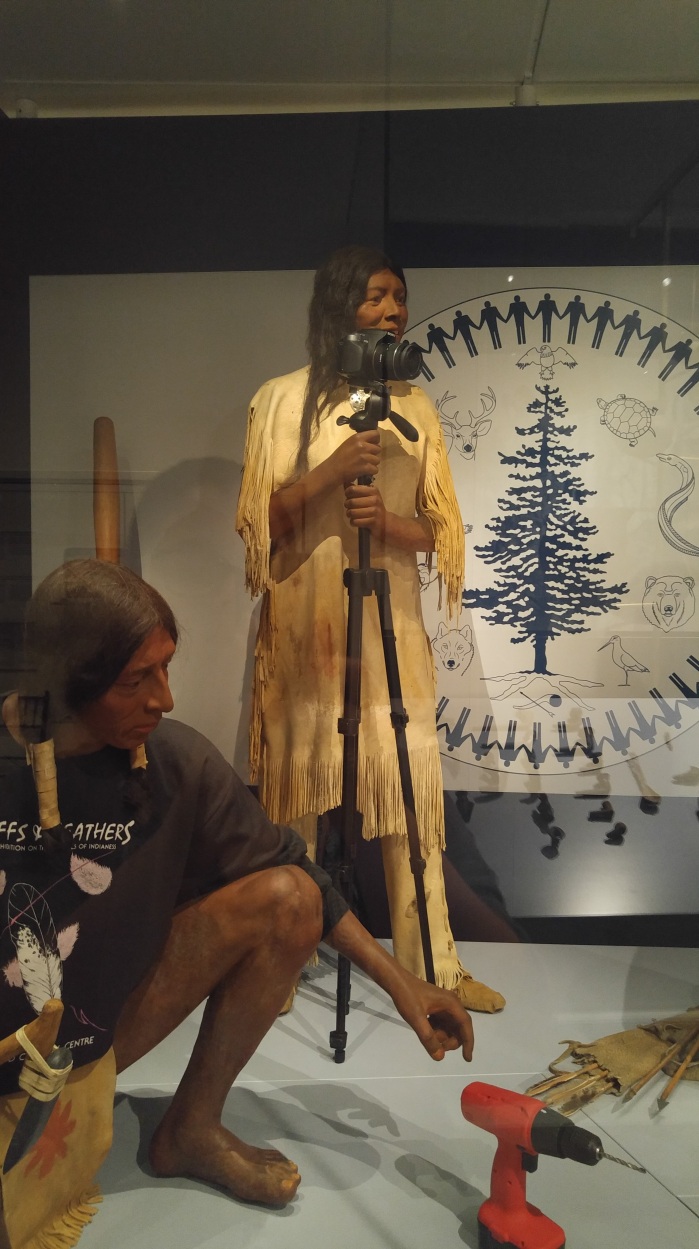 For me this exhibit is a perfect example of how we can update and modernize museum displays. It reflects on itself and the history of curating museums and encourages visitors to view content critically. I also love that this exhibit “breaks the fourth wall” in a way, by not quietly updating or changing the display, but rather making that change a part of the textual content and life of the display. This goes a very long way in breaking down notions of museums as all-knowing neutral spaces, and lays bare the idea that how we talk about our history and cultures is fluid.

I think it is important to note, however, that I was of course not the only one viewing this exhibit. At the same time that I was frantically taking pictures of every aspect of it and trying to take in the information, two senior men were also viewing this display beside me. While I was busy photographing the text panels so that I wouldn’t forget what I read, I overheard one say to the other, “That’s what’s replacing it,” in what I perceived to be a rather sad tone as he referred to the objects that were now resting in the mannequins’ hands. This made me think that perhaps this exhibit is not as effective as I would hope it to be if you do not spend time reading the text panels – and if there is one thing I learned in my classes, it is that more often than not, visitors either don’t, or they do so very selectively and skimmingly.

For me this reinforces the fact that it is important to design exhibits that communicate your main points on a variety of levels. The text is only one aspect. If a visitor does not read the text, than what messages will they get from a display based purely on the visuals alone?

None of this is an exact science, and I certainly don’t have all of the answers. While my experience with this exhibit left me with the impression that, in the case of the two other gentlemen viewing it alongside me hadn’t really understood the intention of the display, I still maintain that this exhibit is definitely heading in the right direction. I hope that in future visits to the ROM I will continue to find more gems like this.